January 17, 2017 â€” VR has entered the first year since 2016, from the beginning of the year to the end of the year, the media continues to burst out of the winter of the VR industry. Is this really the case? We speak with data.

Prior to the second quarter of 2016, major domestic VR vendors were local companies, and most of them were start-ups. Later, with the HTC, Samsung, Sony, LeTV and other companies' VR products have been shipped in the Chinese market. And more and more big companies such as Xiaomi, Huawei, Microsoft, Lenovo, etc. also announced their entry into the VR market. The space left for startups in VR hardware has narrowed, and even some startups have closed down without shipping. For the capital market, the risk of entering the hardware startup market is too high, which leads to the so-called "winter" of VR capital. But it is worth noting that the cautious attitude of VR Capital is only at the hardware level. IDC believes that the capital market can actively seek the direction of VR content market entrepreneurship, and will have the opportunity to find a dark horse-like "Rovio" or "Supercell" in the VR content market. 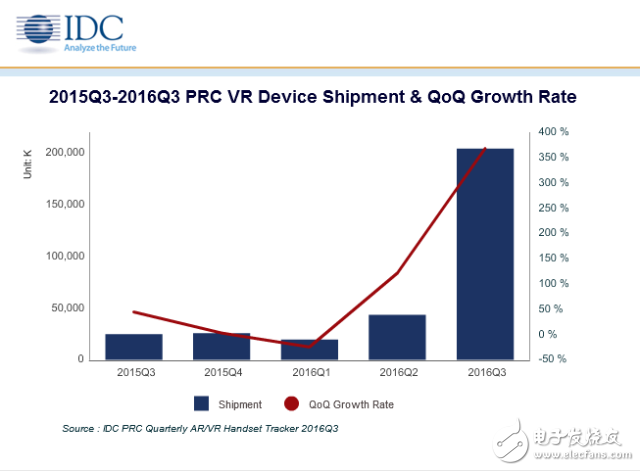 IDC predicts that China's VR market will continue to grow in 2017, with year-on-year growth of 441.2%. Competition will become intense and diverse, mainly in:

1. Large companies have entered the market. Mobile phone manufacturers have found the direction and motivation of smartphone upgrades. Under the encouragement of Google, 80% of mainstream mobile phone manufacturers will enter mobile VR. At the same time, traditional IT giants such as Lenovo, Dell, Hewlett-Packard, etc. will also join forces with Microsoft to launch the VR market. Tencent, LeTV, iQiyi, Storm and other Internet companies with content are eager to try in the VR hardware market. VR start-up hardware companies will face even more severe challenges, and those startups that have already gained a foothold need to quickly consolidate their position in the industry and clarify their direction.

3. No screens are beginning to burst. In 2017, driven by mobile phone manufacturers, no screen display will account for 62.9% of domestic market shipments. The lack of a screen allows more consumers to get a better VR experience at a relatively low price, thereby increasing consumer awareness of the actual experience of VR.

4. Desktop heads will grow by more than 4 times. HTC, Sony, and Microsoft will lead the development of desktop display. Domestic start-up desktop manufacturers will deepen cooperation in the VR experience store or commercial field, or jointly develop with the large platform. Experience, cost-effectiveness and platform will be the three key words for the 2017 desktop display.

5. Independent heads look for the way to break through. Although the independent head display is limited by technology and price, with the support of chips and screen giants, it is expected to find its development direction in advance. As long as the right target market is identified, there are opportunities and growth points in the overseas market, the gift market and the commercial market.

6. The content is further matured and the application of mild industry rises. Impressive VR content will begin to appear in the first half of 2017. The manufacturer will further develop the VR industry test water layout, and gradually develop VR light industry applications based on display and entertainment.

2017 will be a year of great opportunities for China's VR industry, but it will be a big change. VR content is becoming more and more abundant, and the business model is more diversified, but it will inevitably face the collapse and deterioration caused by the large number of participants. The word "cold winter" is overstated, and the early spring of the Chinese VR market is worth looking forward to.

Note: China's mobile phone box market shipments of 16Q3 were 1.268 million units, and maintained a double-digit growth. However, since the mobile phone box is not counted as a VR product according to the definition of IDC, it is not included in this analysis. However, it is undeniable that a large number of mobile phone boxes have a positive effect on the popular VR concept, but due to the poor experience, it is also a double-edged sword.